Time is really flying. This is my 52nd post on my weekly blog. One year of blogging nearly every week! I honestly can’t believe it’s been a year already and it’s been a joy sharing my kitchen adventures with you all. I’ve had so much support and encouragement over the past year and it means so much to know you all are cooking along with me! Here’s to another year of kitchen adventures and amazing recipes!

I wanted to make something special this week. A recipe I have been wanting to make for a majority of the past year. My parents recommended I make Shrimp and Grits in the early weeks of my blogging debut. Immediately I was intrigued but also extremely intimidated by the dish. In hindsight, I’m not really sure why I was so intimidated by this recipe. My experience really cultivating my own version of shrimp and grits was one that left me feeling immensely impressed and proud of what I created. The satisfaction was not limited to feeling full at the end of the night- I had conquered a fear and made something amazing.

My biggest hang up with making this dish began with the shrimp stock. I rarely purchase shrimp with shells, and the idea of using those shells to make a stock seemed time-consuming and tedious. Luckily, deveined ‘easy peel’ shrimp was on sale at my local grocery store. Removing the shells and tails for the stock was a breeze. The shrimp stock only took about 10-15 minutes to make and it enhanced the flavor of the sauce in a way that you have to try to understand. Cooking the grits also was daunting for me simply because I probably haven’t made them in over a decade. But the stone ground grits I used were simple and delicious. I shouldn’t have been worried at all! It was almost too easy to make the perfect cheese grits.

What began as an adventure following a particular recipe turned into me pulling the best aspects of two recipes and turning this shrimp and grits into a creation of my own. It was a risk. Admittedly, I had a backup meal ready to go in case I messed up the grits or ruined the shrimp sauce! I had researched a few options but when it came time to cook this southern delicacy I was inspired to do my own thing and it turned out great. Cheese grits seemed like a better option than plain grits, that was a total win. I also decided to incorporate tomatoes, onions, and peppers into the mix with the smoky flavor of bacon. My tactic became the richer the flavor, the better!  This was a series of choices that did not disappoint. My risk resulted in a sensational reward. 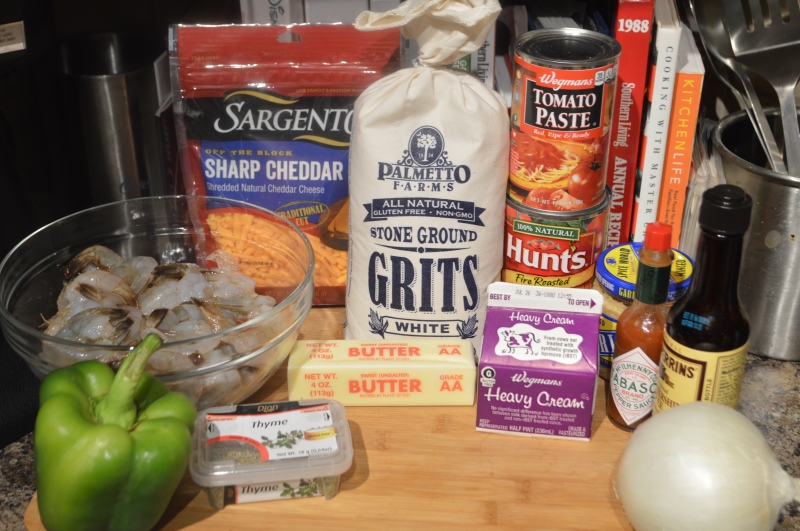 Inspired by these recipes.